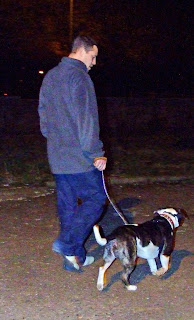 Most training revolves around establishing consequences for the dog’s behavior. Operant Conditioning defines these following four types of consequences.
Punishment is not retribution!  It is not pysically abusing your dog!


Positive Punishment is the use of an aversive to decrease the likelyhood of a behaviour reoccuring. It needs to be something that the dog does not like and it must be unexpected.  Dogs will find some things more punishing than others, and some commonly used punishers may not be punishers for some dogs. For instance one dog might have an extreme reaction to a raised voice, another dog might find water squirters fun. Can you imagine what would happen if I used rattle bottles or water squirters in class or on a one to one session with dog that had a phobia?

A trainer using or recommending the use of positive punishment and aversive techniques has no concern and/ or understanding of the likely effects they have. Dogs don’t generalise very well, that is why we train them in different locations, so they understand what is required of them in every situation. So to stop an undesired behaviour the punishment would also need to be applied in all the different locations the dog does that behaviour, the punishment has now become abusive and cruel.

A common misconception is that the dog knows it has done something wrong because it looks guilty. This is often said by owners of puppies, who after returning home find a mess. On spotting the chaos the owner will shout “what have you done?” The puppy who was delighted to see its owner has no idea that the person is cross about something that happened while they were out. All the pup knows is that the owner has returned in an angry and aggressive manner. The guilty look is the pup trying to appease the owner. The dog will start to become anxious about the owner’s return, especially if sometimes the owner comes home happy and sometimes angry, as the dog will never know what to expect.

Nose taps or face slaps are another punishment that people think are successful, especially for house training. The puppy offers the same appeasement gestures which the owner mistakes for guilt and that the pup knows that house soiling is wrong. Smacking is also often recommended to stop puppies biting. The puppy learns that hands coming towards it means that something bad is going to happen, so when a person goes to pet the dog, or even just move their hand, the dog believes it is about to be hit and may learn to respond with aggression to make the threat go away.


Punishment only interrupts the behaviour, people think it has worked because the dog stops what it is doing temporarily. But as the dog hasn’t learnt an alternative acceptable behaviour it is likely to repeat the unacceptable behaviour and will therefore be punished time and again. It is better to teach your dog to do something you want instead of punishing it for doing something you don’t want. For instance; when greeting, instead of punishing jumping up, teach all four paws on the floor.


Below are some common aversives, their uses and fall out problems. Most aversives had the side effect of causing aggression. The dog feels that it has to defend itself against what is happening or what it thinks might happen, the only defence the dog has is its teeth.

Use - To stop the dog doing something unwanted such as aggressive behaviour by giving an electric shock
Fall out - The dog can learn a negative association between the presence of other dogs or people and pain and become aggressive or more aggressive.

Prong Collar, Training Collar, Wonder Collar, Illusion Collar, Choke Chain
Use - To stop a dog pulling on the lead by causing pain or by cutting off the airway. The collar doesn’t stop the problem, it will always be needed unless the dog is taught to walk on a loose lead

Fall out - As above, the dog can associate pain with the presence of other dogs or people and turn to aggression to keep away the approaching threat. Restricted air supply can cause the dog to pass out.

Use - Startling the dog into stopping the behaviour.
Fall out - Other dogs in the area can also be startled, some dogs can become desensitised while other dogs become over sensitised and show extreme fear including to whatever else happened to be in the area at the time including other dogs and people.

Manhandling - Alpha Rolls, Pinning, Scruffing
Use - To show the dog who’s boss and it’s position in the pack
Fall out - Dog can appear calm or resigned, however the dog has gone into shutdown. estricted air supply can cause the dog to collapse. Fear caused by manhandling will cause the dog to not trust people and can cause aggression.

Smells— Citronella collars, Lemon squirts TCP
Use - Some devices spray the smell to stop unwanted behaviour, others are pushed under the dogs nose.
Fall out - Spray collars left on unattended dogs mean that owners have no idea when it is going off, other dogs barking can trigger spray collars. Dog can learn fear reactions towards perceived perpetrator, resulting in aggression. Smell stays in dog’s nose and coat, causing constant punishment.

Never use physical punishment that involves some level of discomfort or pain, which may cause your dog to bite to defend itself or become distrustful of you, other people or other dogs.