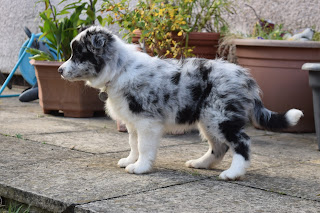 Little Tatty is 5 months old today.  For the past few weeks I've been taking her to Ringcraft classes as I would love to show in breed classes. Who knows she might even qualify for Crufts.

Last year her uncle Caleb was at another Ringcraft class but that closed down so we found a class that's a bit further away to go to.

This is the 21st century and dog training has moved a long way since the 1960s.  Apart from at Ringcraft it seems.

Tatty's first week was just to get her used to the atmosphere so I was watching my puppy rather than the other dogs and what was going on.

Ringcraft is generally structured differently from general pet dog training classes, there are mats on the floor making a triangle for you to run along and a dissecting line from top to bottom so you can do a straight run at the "judge" who is the trainer.  They are designed to help you in your dog show journey.

So week 1 of Tatty's lesson, this is the first time she has been on a show lead, the first time she has been on a lead attached to her neck, usually I walk my dogs on a harness.  First thing I get told is to have my lead tight, and coming from the top of her neck, right behind her ears.  Border Collies are shown on a loose lead and it comes from the side not the top.  I tell the trainer this and that if she'd taught on a tight lead she's always going to be looking for a tight lead. I get told that I'm wrong, you have to start on a tight lead so they know they're on a lead! I was also told that when she's jumping up to stop, pop the lead and shout NO!

Week 2 as Tatty is doing her run down the middle mat there is a commotion at the end between a couple of dogs.  Tatty freaks so I pick her up to move her away.  Trainer (this time the lady trainer, last week it was the man) tells me to put her down because (quote) "you're raising her up in the hierarchy".  I am not sure what hierarchy I'm raising her up in and why this doesn't count for the small dogs that get carried around the place, or even if a 4.5 month old pup understands this very human concept of how dogs interact.

Week 3 It's the man again.  Tatty is being a banana and bending away from him and leaning in to me when she's being "gone over" a technical term that means the judge puts their hands on the dog to feel it's shape and muscles.  I'm told to make her stand still and when she leans on mum to push her away and sharply tell her no.  (Hmm I want my dog to come to me when not sure about something).  We do the running up and down the mat, she's ok but during the 2nd run along the centre mat she starts the jumping.  Again I told to do the leash pop (he doesn't term it leash pop he says pull her back) stop and shout no.

Then he notices the clicker!  OMGoodness you'd think I'd brought in something evil. His actual words were "oh you have a clicker" but the tone was total disgust, it couldn't have been worse if Tatty had left a pressie for him to step in.


I have also witnessed a lot of leash corrections going on with dogs who are on show chains (like choke chains but thinner as they don't ruin the line, think along the thickness of cheese wire).  I have also seen dogs being run with their leads so tight their front feet aren't touching the ground (nothing is said). I have seen a tiny terrier breed puppy, at what I think is his first time, stop in the run and the owner being told to keep going, dragging the puppy behind! This is so the puppy doesn't learn he can get away with stopping

So having paid a membership to this ringcraft club I have to decide do I keep going and keep with the R+, ignoring the trainers who are very P+.

Tatty seems to enjoy it. She is a social butterfly.  Do I maybe not go weekly just go the week before there is a show and keep training her at home with my clicker.  There is another Ringcraft class about the same distance away, I'm thinking of going along to see what happens there.

What I do know I'm going to do is start up my own Ringcraft club as part of GDTS.
Posted by Cloverleafk9 at 00:30