Dog Training, the good and the bad 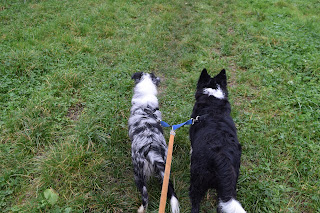 Social media has been buzzing lately with loads of arguments from the different dog training camps.  Those who use punishment based training and those who use reward based training have been clashing again. All because of a TV programme that aired on Channel 4 on Friday 10th March.

Why has this programme caused such a stir?  Well to be honest I haven't watched it and I don't think that it is ethical to bash another trainer, but I do think that for the good of dog it is ethical to point out the right from wrong when it comes to training our pets.

Why haven't I watched and what makes me think I can then comment on something I've not experienced?  I have experienced this trainer's methods, the trainer uses dominance, punishment based training to cure dogs of their behaviour issues. I have been called in to help owners who have dogs that have been trained in this way "as a last resort".  I haven't watched the programme as I know the trainer by reputation, plus I was at work helping people to train their dogs using positive reward based training when the programme aired and frankly life is to short to bother watching something that I know will upset me, especially if the comments I've seen are anything to go by.

When looking for a dog trainer what should you be looking for?  There are a lot of phrases and words out there that are popular and misleading. You want a trainer that is using reward based training; Science shows us time and again that this is the best way that dogs (and all other animals) learn. Skinner has said that even using a no reward marker can impede the learning ability; sorry for the jargon, a no reward marker (NRM) is often used to indicate that the dog isn't doing what is wanted, for instance "A-ah". Whereas a reward marker has the opposite effect, ie using a clicker to let the dog know that is what you want it to do.

Some trainers will talk about corrections, what do they mean by this?  Well most trainers using corrections mean that they will use a form of positive punishment, often this is used to teach dogs not to pull on lead, dog pulls handlers jerks the leash, also called leash pops.  In training positive means to add something and negative means to take it away; a bit like maths, it doesn't mean good and bad that's the reward or punishment bit.  So positive punishment is adding an aversive, something the dog doesn't like, such as a jab in the neck with a choke chain.

One of the popular training types is called balanced.  This means that the trainer is using positive and negative training methods adding and taking away rewards and punishments. So for pulling on the lead the trainer may do a leash pop and follow it up with "good dog" when the dog is beside them.

What about me?  Well I use a holistic approach.  What is this? I look at the dog as a whole and try to find out why it is behaving in the way it is. I will look at what the dog is eating and how this may impact on behaviour, how the dog is feeling at the time it is doing the behaviour, the dog's reasons for doing the behaviour and what the dog is like on a day to day basis in it's general mood. I also use a method known as LIMA which means Least Intrusive, Minimally Aversive.  What one dog finds aversive another dog may find rewarding, and vise versa, which is why I believe that a holistic view is the one that is needed when dealing with any other being, whether your pet dog or another person.  It's putting yourself in that situation and finding out how to make it better, for the dog and for the people around the dog.

Back to pulling on the lead, why does a dog do it?  Basic science is pressure causes counter pressure so if the dog starts to forge ahead the handler will try to pull it back, the dog then will lean into the collar (almost all pullers are in collars) and pull harder, this results in a loop where the handler pulls back more and the dog tries to pull ahead more.  We've all seen the dog walking down the street, handler's arm at full length and the dog's tongue almost on the floor, "who's walking whom" is often the quip. Why else is the dog pulling?  It could well be that the dog is having it's only form of mental and physical exercise of the day and is desperate to get to the park having just spent the last 23 hours in the house, with a huge chunk of them alone.  Maybe the dog pulls so much that walkies becomes a huge event because it doesn't happen that often. Maybe the dog just hasn't ever had basic training on lead walking, after all who wants to spend the time training walking?  Isn't walking the dog training it?  Well it's certainly giving the dog the practice at pulling.  Walking the dog isn't training it if the dog is pulling, unless you want a dog that pulls.

So my holistic approach, why is the dog pulling and what can be done to make walking the dog enjoyable for both dog and handler?  Go back to the very basics, put a well fitting harness on the dog, harnesses do not cause the damage to the dog's throat and spine that a collar dogs, plus the dog is getting a different sensation,  I prefer harnesses with front rings as well as the one on the back, used with a 2 point lead this can make all the difference.  Then reward the dog for being beside you.  I'm happy if I can touch the dog, ie the dog is in a radius that could be reached by my hand and if my lead is loose.  This may mean one step at a time and the dog's 30 minute walk doesn't get as far as the garden gate for a few days, you can always pop the dog in the car and drive to a safe place for exercise. I also use a technique known as bottle feeding where the treat is in the hand closest to the dog.  How do my methods help, and why doesn't the dog get frustrated at not walking or get fat? The dog is learning and at the same time earning a treat reward, yes I use food for this the yummier the better,  but the dog won't get fat because the rewards become random as the dog gets better on lead, so the dog will stay on a loose lead as it has learnt that this will bring a reward but it doesn't know when.  Remember that a reward is something the dog likes, which can be switched from food to a ball, or a tug toy or to get off lead at the park.
Posted by Cloverleafk9 at 17:24