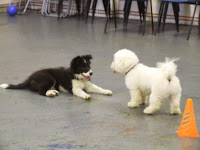 A fun little video of the dogs playing in Day Care.  Watch the other videos too.
Posted by Cloverleafk9 at 23:17 No comments:

The Law is an ass! 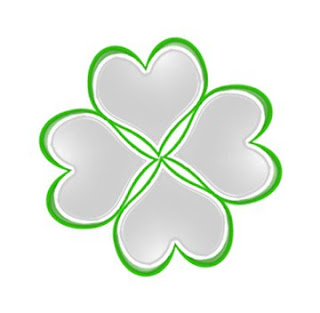 So said Mr Bumble when told that the law supposes his wife acts under his direction in Oliver Twist, by Charles Dickens.

Well it seems that, 175 years later, the law is still an ass and it's not going to change anytime soon.

I was at a dog law seminar over the weekend.  Dog Law in the UK is a bit more messed up than it ever was and it's getting worse for the dog owners in this country.  We currently have the Dangerous Dogs Act that everyone has heard of. This includes the breed specific legislation that is either loved or loathed.    There are around 2300 dogs registered under this ruling, all but 6 are of pit bull type.

Under the Control of Dogs Order 1992 all dogs in a public place must wear a collar with the name and address of the owner on it. This can be stitched into the collar, on a name plate attached to the collar or more commonly on a disc attached to the collar.  It is a criminal offense to allow your dog to be out and about without this and you can be charged.  A few exceptions apply to this rule such as working dogs while they are working.  The maximum fine for this is £5000. The inside of your car is classed as a public place if the car is on the road, but not if it is on your property.

In addition to this from April 2016 (March 2015 in Wales) dogs must  be microchipped.  Oddly there are no rules on keeping databases up to date (there are a few databases already) and there is no restriction on who can implant a microchip, there are people out there watching youtube videos, buying chips and equipment from auction sites and setting themselves up.  The entry on to a database is not a proof of ownership!

New Developments
Apart from the guidelines for sentencing being changed in August 2012 and the compulsory microchipping coming in a couple of years, what else is there for us to worry about?

Section 3of the DDA is to be extended to cover private places.  Police can bail a dog under section 1.  Dog Control Orders will be replaced with Public Spaces Protection Orders and there is will an introduction of Community Protection Notices.

The new developments are due to start in Spring 2014.  Currently Dog Control Orders must be advertised in the local papers, but, Public Spaces Protection Orders will not have to be advertised although "reasonable" signage must be put up, but there is no clarity on what reasonable is or if costs can deem the signs to be unreasonable!  PSPOs are only valid for 3 years and then they must be renewed.

Community Protection Orders can be given by the local council or by the police, they are for individual, not for the wider public, and they can include dog orders, for instance you can be ordered to put your dog on a leash.   CPNs can be enforced by a fixed penalty notice or you can be taken to court with a maximum £2000 fine.

Electric shock collar ban does not look likely and the current ban in Wales is due to be reviewed.  The outcome is, so far, anyone's guess.

Under the Antisocial Behaviour Crime and Policing Bill sentences for DDA prosecutions will be going up from a maximum of 2yrs in prison to 5years and the maximum sentence for a dog causing death is going up to 14years.  Of course these are sentences for people not for dogs.

Where your dog is when it comes under section 3 of the DDA is changing to include private land where the dog has a right to be but is not an offense if there is a trespasser in a dwelling.  This means if your dog chases a burglar and then bites them in your garden that is an offense, although if the dog bites them inside the house that isn't.

If the neighbour's child kicks a ball over your fence then climbs in to get it and the dog injures them then the dog is again at fault.

There will be a new offense of injury to an assistance dog, this will carry a maximum of 3yrs prison sentence.

What You Probably Didn't Know
The RSPCA can give people improvement notices but the legality of these is debatable.  Improvement notices must be given by someone appointed by the council.  They also have no powers under the Animal Welfare Act 2006, although it is the RSPCA that bring the most cases to court.

Under the DDA the person being prosecuted can be a person looking after a dog and not necessarily the owner, for instance you leave you dog in the hands of a dog walker and it causes harm.  But, and this is a big one, the harm can be as simple as the dog bruising someone, it doesn't have to be a bite.  Harm can also include mental harm, for instance some is so frightened by your dog that they no longer leave their house.  There is no minimum level of injury and provocation is not a defense.

Politicians want it to be a criminal offense if a dog injures another dog, this doesn't matter if the injured dog was the original aggressor and the injury is caused through self defense. The RSPCA want this to extend to other animals, Blue Cross want it to extend to horses and the Cats Protection League want it to extend to cats.  This could come in within the next four months, so by the end of March 2014 your dog can become a criminal and, by extent you,if your dog injures a cat that has entered your garden.

The maximum penalty for dog cruelty under the Animal Welfare Act is 51 weeks prison but these cases are heard in a magistrates court where they are limited to giving 26 week (6 month) sentences.  In addition to this if someone enters an early guilty plea they are automatically given 1/3 off this which means they can spend as little as 4 months - 16 weeks in prison. But they can also be fined up to £20,000.

Another scary thing is, although the dog is in law seen as chattel ie property if someone steals your dog and it ends up in the hands of a 3rd party, such as through adoption from a rescue centre, then you have no rights to your dog!  If the council finds your dog as a stray, after 7 days it becomes their property; if you have not claimed it back; and they have the right to dispose if it as they see fit.  This could be your dog is put up for adoption or it could be that it is put to sleep.

You can also keep up to date on what's happening with dog law by looking at the Dog Law website www.doglaw.co.uk and by liking them on Facebook.

Keep your eyes out for any consultations about dog law that come up.  You have the right to be consulted and most of these are conducted on line.  You can also engage with your local MP about laws and how they vote.

Yet again the news is full of a small child being "mauled" and "shaken like a rag doll" by a family pet.

I don't know the circumstances about this latest tragedy; but I do know about dogs.  Any dog is capable of biting; generally it is a last resort for a dog who has given every other signal that it is uncomfortable in a situation that it can.  Unfortunately a big dog vs a person is going to cause more harm than a small dog.  Even cats give nasty bites and scratches, although these are less life threatening to people.

Learn and look out for the signs.  Behavourists call these appeasement signals and we also refer to the ladder of aggression.  Dogs may have learnt that the signals are ignored, or (worse) punished by people.  If your dog gets to the growl stage do not punish the dog, respect what it is saying and give it the space it is asking for.  Your dog is not trying to be dominant or rule you, it is asking you to take notice of its feelings and to help it in a situation that it cannot remove it self from. 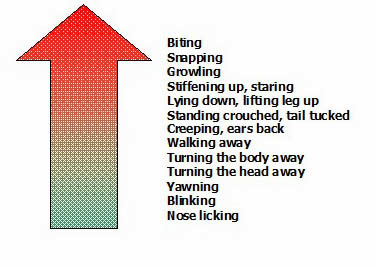 One report of the dog in Leicestershire says that the little girl was ill in bed and the mother was there tending to her child.  For some dogs a crying child; and we don't know if this child was crying at the initial instance; can sound like a prey animal that is in trouble and their instincts kick in.  Other things that can trigger a dog into a bite situation can be people hugging each other.  Hugging is not something that dogs do or particularly like if it is done to them.  Many dogs will try to split up a hug by getting in the middle of it.  This triggers a reaction from people where the dog is pushed away, yelled at or even slapped, all of these can lead to a defensive bite from a dog.

The wonderful Lili Chan has great drawings on her website that illustrate dog body language beatifully http://doggiedrawings.net/post/842176625 please take the time to look at them.

For some good dog news.  An abandoned baby was found by a dog.  http://www.bbc.co.uk/news/uk-england-birmingham-24770596 and named after it.

Posted by Cloverleafk9 at 10:56 No comments: