Still in the news 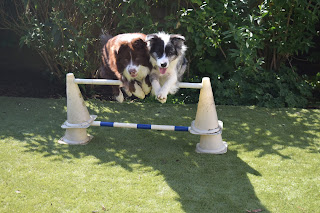 
And have been the basis of animal welfare in the UK since the 1960s.  Lets just take Freedom from pain etc, yes this means that if your dog is injured you need to have it treated but it also means that we should not inflict pain and the Freedom from fear and distress.

TV dog trainers and a lot of people who are running dog training clubs, or who are offering dog traning and behaviour on a one to one basis use methods that cause pain (there are studies on the use of shock collars showing they cause pain and studies on the use of choke chains showing the same).
Just the other day I heard of a puppy in its first training class learning about not going through doors, how?  By having the door slammed in its face.  Pretty sure that this would have caused fear and distress, the owner says it upset them.  There is another training class where people are being told to use choke chains to control their dogs, the trainer there also has said to me that although they haven't used them personally they would recommend the use of prong collars.

There is a trainer from "over the pond" advertising a UK tour, although not publishing venues!  This person is well known for their use of punitive, physical punishment of dogs which is certainally not in keeping with UK law.