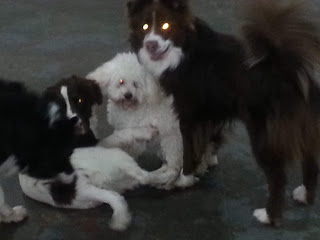 DEFRA recently brought out some new laws on how dogs, are to be looked after when away from their homes.

Some of the rules contradict others and put some people at a disadvantage.  For instance if your dog goes to a traditional boarding kennel they are allowed just under 2sq meters per kennel.  But if you are a home boarder you have to allow one room per dog, but some parts of the house are excluded.  If you have previously been allowed to have 5 dogs at a time but your house is the average size, kitchen, lounge/diner and 3 bedrooms you could in theory still have 5 dogs.  If any bedroom is used by someone under 16 then that is excluded, if you have your own dogs you have to allow one room for them.  That could leave the home boarder with 2 rooms available for boarding, cutting numbers from 5 to 2.  This would include any day care dogs they have.

On the day care front each dog must be allowed a space of 9 square meters.  It doesn't matter if you have a home based day care or a unit based day care the rule applies to all.  My own sitting room is not this big.  I am not sure if it applies to boarding kennels that offer day boarding.

The rules on how long a dog can be left for have been changed, whereas it was 3 hours for any dog it is now 3 hours for boarding dogs and 0 hour for day care dogs.  The limit the dogs can be crated for in a 24 hour period is 3 and one.  People who are offering a home from home service and need to collect children from school are now tied to having to chose between day care and looking after their families.

Fortunately this week we have had the on lead/off lead rule changed.  It was boarding dogs can be off but day care dogs on.  You can only imagine the chaos that was coursing.  And with the rules about how long dogs can be left anyone with more than 4 dogs in their care would have to leave some behind as we can now only walk 4 at a time.

DEFRA aren'y alone in the blame, they worked alongside some other organisations  and held a consultation https://www.gov.uk/government/consultations/animal-welfare-reviewing-animal-establishments-licensing-in-england.  But this did not include day care centres and as far as I know people in the industry weren't widely aware of the consultation.  The Guidelines weren't released until the day that the law became statute which meant there has been no time for any changes to be done.

As an industry we are fighting to have the law and guidance reviewed, we have been successful on some fronts but feel that we are not being taken seriously and are given non answers to some of the questions.

The biggest thing for all of us is the vaccines that DEFRA insist are used but research data shows they can be dangerous.  Lepto vaccine is the deal breaker for a lot of people as some don't want to vaccinate their dogs, including clients, although titre tests for the other vaccines are accepted.

They have included vaccines for breeders also.  It not only effects big puppy farm breeders, which the legislation does nothing to deter, but it effects "hobby breeders" those who only breed a litter every couple of years in order to keep their own line going for show or sport.

The law was brought in to supposedly make things standard across the country, but some councils are still making up their own rules and the costs of licensing vary hugely.  This includes confusion over hobby breeders with some councils saying that they are out of scope and others saying that if they even sell one puppy they have to be licensed.

I sent an open letter to DEFRA as well as to other involved people, the only reply I have had is from my MP who has passed it on to Michael Gove.